I have always loved bamboo. A few years ago I did a writer's workshop in Grande Riviere during which I spent hours by the river everyday, listening to the bamboo swish and groan in the afternoon breeze. In Jamaica, the hillsides are covered in huge bamboo patches that look lacy and feminine from afar.

This weekend I went with my friend, Michele, on a trek to the three pools in Blanchisseuse. She was taking a group of boys that had been participating in the YMCA programme, Shoot to Live, and the idea was that we'd hike and take photos. Well, it's been raining very heavily recently, so we didn't get very far. But I was still able to take some photos I really like - of the glorious bamboo! 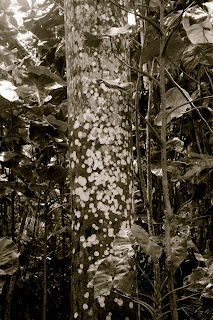 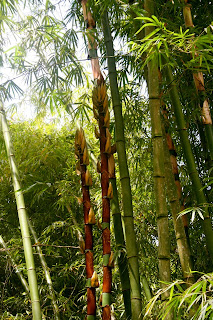 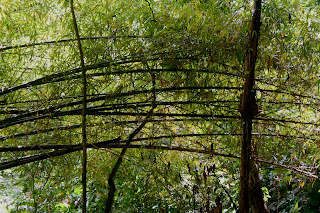 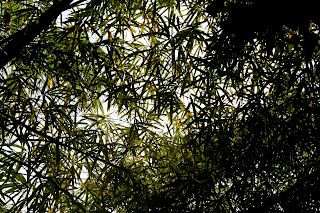 Review of Taryn's: The Panyol Place 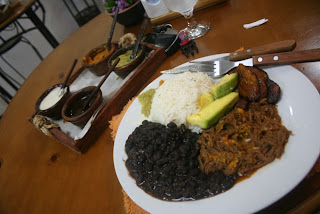 A plate of pulled beef with white rice and black beans, fried plantain and avocado pear.

A couple of months ago, Richard brought some arepas home for me to try. They weren't what I was accustomed to: these were round instead of crescent shaped, and the corn patty had been sliced open and filled with various things. Then my friend, Chris, mentioned it to me. He said they served proper milky coffee and real rice and beans from Venezuela. So I decided to give it a try myself.

Taryn's has a fairly unprepossessing facade on Mucarapo Road (opposite Hotte Shoppe and next to Creole Cuisine), which is a shame, because it means that if you're walking along the street, you're likely to pass it straight (as I have been doing for several years now). But, if you make it through the door, you'll be pleasantly surprised. It's a bright eating spot, decorated unpretentiously with bits of Venezuelan bric-a-brac and a handful of dining tables, which are generally decorated with little vases of fresh-cut flowers (score big points from me!).

Taryn's serves a variety of simple South American eats including empanadas, arepas, rice and beans, fried plantain, pulled beef and flan (the ubiquitous creme caramelesque desert). The first time I went, I ordered coffee and an arepa with crispy pork. The arepa was made out of white corn - it was firm and creamy, and the crispy pork wasn't bad at all - a little dry, but tasty none-the-less. Of course, what made me very happy were the two thin slices of avocado pear Taryn added! Yum! And Chris was right - the coffee was great - fresh, strong and milky (far superior to, say, Rituals).

Taryn herself was a delight. It seemed to me that this was her passion - that she enjoyed looking after people and feeding them. She greeted everyone with a smile of welcome which was very endearing.

I've been back to the Panyol Place a couple of times now - each time I've tried something different, and been generally pleased with the results. I do have a few critiques, though. When Taryn is not there, the service doesn't match up. The rest of the staff aren't as warm or friendly and it can take much longer to be served. I also find the price point generally on the high side. When I consider that the dining experience is not too far off what pertains at the Breakfast Shed, I'd say you pay at least $15 more per plate at Taryn's. For example, my lunch of rice and black beans, pulled beef, fried plantain and avocado was $60, when a similar lunch would have been $45 at the Breakfast Shed.

But I'd definitely go back - if for the coffee alone.
Posted by Ms Sancoche at 3:38 PM 3 comments: