When your cup is empty 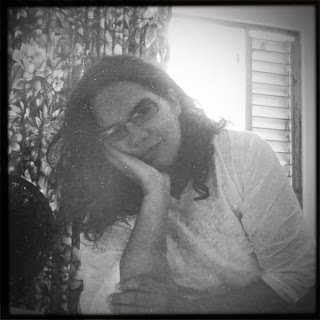 I've been thinking about writing this post for a long time. But I've procrastinated. I've always thought of blogs as places where people share happy things, cheery things. Certainly not places where people share sadness. And so, even though this has been circling around my mind in various permutations for over a month now, I've been putting it off. (Please, don't feel compelled to read further, if what you're looking for is something cheery and happy - but then, sad has its place too, in the scheme of things.)


Six years separate these two moments on Lady Chancellor hill. For those who don't know Trinidad, Lady Chancellor is a beautiful road that rises close to the crest of a hill and looks out over most of Port of Spain. I have lived there at various points in my life and come to know its twists and turns quite intimately. I also know its seasons very well - that raunchy smell of cedar coming into leaf that means the rainy season has just about started. The red Imortelles that could mean it's going to be a short dry season, or a long, parched and burning dry season. The growing numbers of walkers, pushing their ways frenetically up and down the hill, which means that carnival is on its way. And of course, the arrival of the magnificent pink and yellow Poui trees which always make me smile.

Although at times the hill rises gradually, it can surprise you with a steep twist that gets your heart pumping. And if you decide to walk up and down it all the way, it can take you upwards of an hour and a half.

In 2005, my family was in Trinidad for Christmas - including my father. That Daddy had joined us was a rare treat. Since my parents divorced when I was five, I could probably count on one hand the number of times we'd got together as a family for Christmas. Daddy was staying downstairs with me in my apartment, and Saffrey, Mum and Auntie Libby were in Mum's apartment directly upstairs.

Daddy was in a good place. Four years earlier he'd had triple bypass surgery and in 2005 he was truly well - and he looked it. He was eating well, exercising regularly, and he wasn't smoking at the time. (His love-life, if I remember correctly, was a bit tormented, but then that was often the case with Dad.) Because he was a competitive person by nature, he had got into the habit of timing his walks in Jamaica (where he walked around the Mona campus) each time challenging himself to go a little faster. I remember he had even gone so far as to measure, with the odometer in his car, a distance of two miles exactly, and that was what he would walk. At some point during his stay in Trinidad, he had determined that he qould conquer Lady Chancellor. Now, like me, it was a hill that he knew well. In his youth he would take his dog, Mac, for walks through the Botanic Gardens (which was very close to where he lived) and up Lady Chancellor. But I suspect it had been a good 45 years since he had last attempted the hill.

I think the day was overcast. But he put on his sneakers and socks and an orange t-shirt and declared that he was going. I must have asked if he was sure that was such a good idea (you can always see the approaching weather from Lady Chancellor) but as I said, he was resolved; he was ready to tackle the hill. So he set off. I must have checked my watch to guesstimate when he would be back. If he went all the way to the Savannah, it could have been an hour and a half. I carried on about my puttering, and surely as I predicted, it started to rain. I mean heavy, torrential rain. I thought that Dad would certainly turn around and come back. He would be soaked through in a matter of minutes, and an hour is a long time to be completely soaked. But my watch ticked and ticked and still no Daddy.

About half an hour later, I decided to rescue him. So I threw a large towel into the back seat and tore off down the hill in search of him. Surely enough, there he was - about 25 minutes walking distance from home - pounding the asphalt road toward me. He had a sort of grimace on his face, coupled with the smallest of grins and a twinkle in his eye. The look that said, I'm doing it - soaked as he was, rain still coming down in sheets. I pulled up alongside him expecting him to jump in the car. But he didn't. He shook his head and kept walking up the hill. He arrived home about half an hour later - drenched and so proud. He had conquered the hill - in every way. I still wear that orange t-shirt today, to remind me of him and that moment. 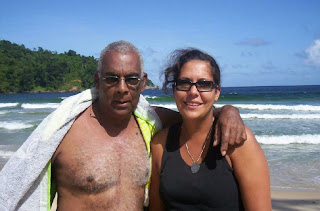 
As I mentioned earlier - six years separate these two moments on the hill. About three weeks ago, I went walking on Lady Chancellor. For months now, maybe even years, my personal resources of strength, courage and even happiness have been depleting, and I have been struggling; no, fighting, to find a way to put something into the cup that is my life. On this day, I was sitting in a chair at my mother's apartment thinking nothing. Blank. Empty. Staring. To try to lift myself out of the moment, I put on my sneakers and walked up the hill, determined to flee that void of feeling. But as I walked, I found I couldn't. Because there was still nothing. I sat on a wall beneath a cedar tree and wondered how I would get back to Mummy's, even though I was only five minutes away.

And two angels walked up to me.

"Ain't you is the lady who does make that show Sancoche?"
"Yes," weak smile.
"Like I ain't see you in a while."
"I know - sorry, the show stopped a couple of years ago."
Then, "Keep going, dahlin'," one of the ladies said. "You almost reach."

I smiled at her and thanked her. It was a slightly stronger smile. And like Daddy, I got up and walked down the hill - further than I had done in years. And then I walked back up again. I think I poured a few drops into my cup that day.

None of these days - possibly not since my father died - has been easy. Surprisingly. they seem to get harder. But I am finally beginning to understand this thing my father seemed to know - you have to have something in the cup. For him, solace could be found in sailing, in reading, in his dogs, in his lifelong friendships, in his time at Leslie, in his workshop sessions. We all have to find places of solace in our lives... somewhere where we can rest. My father's house was one of those places for me, but there are others, and I must make use of them.

As for you Dad, I don't know when the pain of your death will ever pass or ease, but what I do know, is that as much as you would empathise with me, you would insist that I live - that I walk the hill, that I earn my place, "through this sometimes vale of tears". (Those were his words.)
Posted by Ms Sancoche at 9:37 AM 3 comments: