A Room with a View

I can sit here and look at my aunt's garden for hours. Her dining table, which is where I have set up my computer, looks out onto her patio and the garden beyond. It's early summer here, so the roses and peonies are in bloom; violet irises and lavender-coloured clematis, which creep their way up and along a wooden trelis. There are large trees at the back of the garden which sweep and swoop in the breeze, and a little ornate bird bath, into which all sorts of birds splash around with gay abandon. A couple of days ago, a giant, pale pink poppy opened and soon others will follow. Like I said, I could look at her garden for hours. 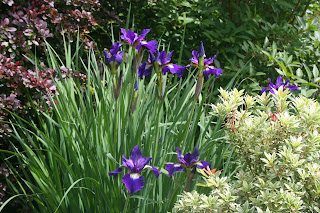 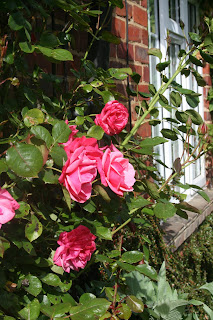 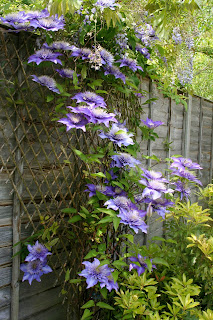 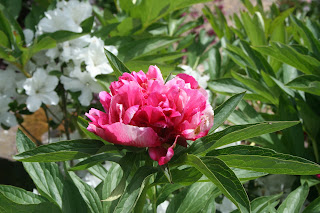 I remember in E.M. Forster's "A Room with a View" being amused by the fuss at the beginning of the movie (saw the film before I read the book) over Lucy and her chaperone's not being given a room with a view at their little pensione in Italy. There was one helluva kerfuffle (and that's when Lucy ended up meeting George, her love to be) over the fact that they had been promised a room with a view - a promise which had been reneged on.

But now I understand what all the commotion was about. A view is everything. It's what liberates us from the smallness of the spaces we inhabit (both physically and mentally). A view is full of possibilities for lives going on out there - where there's room to move and to breathe. Everyday, I look at at my aunt's view and it both calms and inspires me.

There was a house my sister and I lived in, as adults, in Jamaica with our father. It was a tiny house with only two bedrooms. But it had two magnificent silk cotton trees in the front garden (I actually angled my bed and kept the curtains open, so that when I opened my eyes in the morning, I did so to the dappled green light of the silk cottons) and a wonderful view across the valley on the other side of the house. This was probably the first house I can remember my father not having a room called his "study" in, because the room didn't exist. So he set up his work place on the dining table. My sister and I set up his computer so it faced the kitchen, he changed the whole arrangement so that he could work at his computer and look out at the view across the valley. Again, I was both amused and a little irritated by the kerfuffle. "What difference does it make?" I thought. But now I know.
Posted by Ms Sancoche at 9:28 AM